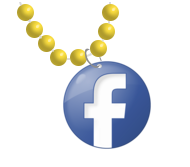 
The King Cake is believed to have originated in France around the 12th century. These early Europeans celebrated the coming of the three wise men bearing gifts twelve days after Christmas calling it the Feast of the epiphany, Twelfth Night, or King's Day.

The main part of the celebration was the baking of a King’s Cake to honor the three Kings. The cakes were made circular to portray the circular route used by the kings to get to the Christ Child, which was taken to confuse King Herod who was trying to follow the wise men so he could kill the Christ Child. In these early King Cakes a bean, pea, or coin was hidden inside the cake. The person who got the hidden piece was declared King for the day or was said to have good luck in the coming year.

In Louisiana, Twelfth Night also signifies the beginning of the carnival season which ends with Mardi Gras Day. The bean, pea and the coin have been replaced by a small plastic baby to symbolize the Christ Child. The person who gets the baby is expected to carry on the carnival festivities by hosting the next King Cake party.

Our King Cakes are baked fresh daily and filled with real fruit filling, fresh cream filling, or a combination of both. King Cakes are decorated in the traditional Mardi Gras colors; gold (for power), green (for faith) and purple (for justice).